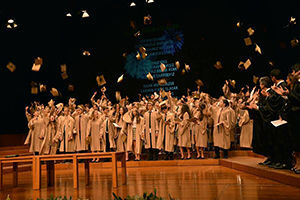 Saynur Kayal, as MC, opened the ceremony. David Cardenas gave a unique speech about finding one’s identity by asking questions to the students about a book they had read in one of their classes. Rukiye Devres Ünver, member of the Board of Trustees and Deputy Chair of the Board of Directors, spoke on behalf of Hisar Educational Foundation. She emphasized to our students that in order to learn they should not be afraid to make mistakes. Then, Class of 2011 graduate Umutcan Karakulluçku took the stage. Umutcan, who received a Bachelor’s degree in Civil Engineering from Boğaziçi University, is currently pursuing a master’s degree in Financial Engineering. He talked about his own high school experiences and advised our students to pursue their dreams and make a difference in their lives. Our 8th grade student Ali Ç. gave a speech on behalf of his class. He used a Rubik’s Cube as a metaphor to explain what life is like in middle school and noted that while his friends are different from one another, it is those differences that make them all special and valuable. After, the recipients of the academic excellence certificates and awards were announced, and all students received their class letters. The ceremony ended with our energetic school anthem, which was followed by a joyous reception. We congratulate all of our students and teachers.