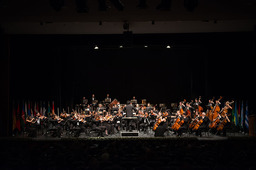 In honor of the 10th anniversary of our Culture Center, we were very proud to host Tekfen Philharmonic Orchestra, which is one of Turkey’s leading private art institutions, after exactly 10 years from the opening concert in 2009.

German clarinet soloist Sebastian Manz and Turkish clarinet soloist Serkan Çağrı were accompanied to the orchestra under the direction of Aziz Shokhakimov, a young talent of Uzbek descent who has been the permanent conductor and art director of Tekfen Philharmonic since 2017, the 25th anniversary of its founding.

We would like to thank Tekfen Philharmonic Orchestra for giving such a concert on this special night.